Drawing of the Week

Drawing of the week 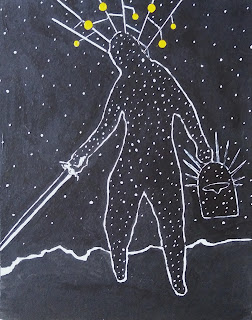 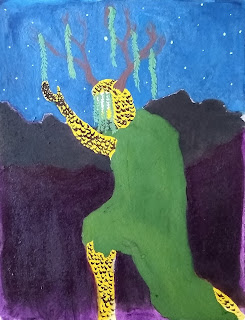 Drawing of the Week

Email ThisBlogThis!Share to TwitterShare to FacebookShare to Pinterest
Labels: Art

Thank you for the many years of bravery and service.

After some time away from this game, decided to get back with it. I’m pretty sure it had a lot to do with the overwhelming nature of learning it all, the system, solo play without previous experience, and summer heat wave lethargy, sure. Well, this saga in the making, sally forth.

Started off as a fun thing, then realized a map could help generate story prompts for solo play, a half sandbox. Filled in first hex (note 001 near main city) with an ancient tree feature from Perilous Wilds supplement. Will compile all these hex details in a list as I go, to keep track of world features. The empty location banners are fun to fill in as I go. I think this initial map will offer much to explore.

After staying out of sight for two nights, receive a note under our door to come to the wharf after sundown the next night to meet Sawney Reith.

Steady rain on the way to the wharf. When the party gets there, they see d10 henchman: 4. He doesn’t trust the party yet, probably rightly so. The feeling is mutual…

Being involved with a local crime boss is not necessarily the direction the party wants to go, but it may present some interesting opportunities.

Does Sawney Reith call us here to offer another mission? Extreme Yes

There has been word that a powerful individual with ties to the corrupt government has been antagonizing some workers not too far outside of town (so Reith’s reach extends beyond the town’s walls). At the mill, about two days walk from town, a man named Balthazar Slora has been ripping off his local farmers and mill workers, perhaps taking their share of crop production and passing it off as his own.

-attached to corrupt officials, has uncommon wealth for his social standing, avaricious, quick to seek opportunity, zealous performance of job (likely only a ruse or violence as performance), and now a wealthy landowner (own’s the local mill), he seems to always be carrying something in his hands (?), is stubborn, and trying to impress a lover (I presume this is the local official’s daughter).

He sounds like maybe he was a lower social class guy, who realized there was no real way in the current environment to work himself up to wealth, perhaps offered street knowledge and muscle to the corrupt powers that be in exchange for some wealth and power. Perhaps turning on his community. Did he betray Reith? Will learn more about Slora after investigating.

Does Reith send a lackey to spy on us for this mission? Extreme no

The next morning the party leaves early to reach the mill in a decent time.

Using a version of The Overloaded Die system for wilderness travel. Each new hex and each night gets a roll. If tough terrain, two rolls per hex.

Check once upon entering a new hex. Twice if the hex’s terrain is difficult, and once every second hex if the players are on a road. Check once per night

Encounter: Creature encounter. Players should roll on the appropriate tables in the Bestiary. This interaction can be diversified by determining the attitude or behavior of the creature. These encounters may not necessarily be combative; this might be a recurring encounter with a mysterious figure, a lonely talking dragon, or a band of goblins licking their wounds from a previous combat.

Event: A noncombative occurrence. This may be contact with a roving band of performers, a broke down caravan or the passing through the skies of an ominous comet. The characters may find a hint of the surroundings, potentially leading to sidetracks or encouraging additional searches.

Feature: The characters have discovered an element of the current landscape. It may be a magical tree, an entrance to a dungeon, a hunting camp, a road, a buried treasure, or a shrine.

Rations: Characters are required to consume food and water. If this requirement cannot be met, suffer minor harm (1 HP)

Safe: There is no change or action. Characters proceed with their next action.

* This is a work in progress and combines several sources gleaned from assorted readings, but mostly from Necropraxis.com and Papersandpencils.com

Event – NPC Adventuring Party; 7 members; hostile, but bribable. After some prolonged conversation, they accept 2 gold pieces each ( -14 gp ! on first day out) to leave us be. They are on way to town (a possible future thread, factions!)

Next hex – Find a natural feature; Find an ancient large tree on side of road; evil connotations.

Is there anyone in the tree? No (etchings from the 30 Years War show lots of awful public displays of cruelty and punishment, so such a question seems fitting for the scenario)

Third hex – encounter a friendly hunting party; socialize a little but largely they keep to themselves.

We are traveling light, so decide to flee the campsite (no idea of their intentions, or even what local relations with ogres are in this region, but now is not the time to find out!) Leaving 2 rations per PC to distract them while we flee into the night….Assuming the hunting party is doing the same

Next day – safe, and next hex roll Lost (but ignoring while traveling on road)

We get to the mill. Hanging out in the bushes nearby we can discern d20 = 9 henchman or guards (standing there chatting, dressed decently) and 5 workers (clearly doing tasks and dressed poorly).

The party is not entirely sure on a plan yet, but thinking we need to learn what we can from the workers and discover a way to undermine the operation. Obviously can’t raid the place. A heist? Turn the workers against them?

Not sure on the next direction, but this session was a minor success in expanding the story. It was short and not too action filled, but just thinking of it as a transition episode. Will learn to flesh these out more. The random rolling generated some interesting encounters already! It’s a little clunky still (total lack of experience) but that’s alright. Next session is a little intimidating as it will be largely social and planning an action. I do like how this play has so quickly departed from dungeon crawl, slay monster, take treasure, repeat. I am not entirely interested in that form, so this direction is ok with me. So many NPCs is intimidating.

I am amazed at the vast amount of material in the role-playing world, and more so, it is stunning to see how much is created as a presumably unprofitable labor of love. It's cool, encouraging, inspiring, really. I see many correlations to the art world I spent years participating in. You do it because you'd rather do nothing else; you gain immense pleasure celebrating the success and creativity of others; sharing theories is massively stimulating; the competition exists but it hopefully serves to motivate instead of discourage. There is a lot of possibilities.
Now, I am new to the whole "movement" (?), "field" (?), "genre" (?) - gaming in general. I have no authority and experience to call upon as I wade through the sheer volume of offerings. It's intense, really. But along with years of art making, buying, and occasionally selling, I have also sold books for a living. Nice books, mundane books, expensive books, doesn't matter. I have been lucky to see some great material. Coming to tabletop role-playing was mostly a response to a long-standing curiosity, stimulated through pandemic isolation. The discovery of the indie print-and-play movement pulled me, and then seeing the the kind of rpgs being produced hooked me. From the outside, its D & D, right? That's what you know of. The long history of gaming that it is part of, has provoked, is astonishing. Art and books, creative writing and philosophy fused into one.
Getting into rpgs at what feels like a late start is daunting, especially when teaching oneself. There are rules to read, styles and schools to learn about, growth of comfort with something like role playing, a widely maligned or misunderstood hobby, but one like every skill that requires a lot of practice. Learning to play under the tutelage of an experienced group is probably great, learning in a group of like-novices is maybe even better, but learning to play alone does seem strange. Whereas reading, a favorite past time of mine seems completely natural, working through tables, charts, narrative construction, and maybe even outwardly narrating occasionally feels odd. But I have heard somewhere that early scholars would read out loud to themselves. I do not know the cultural context for that, but I wonder if passersby would glance confusedly at the person reading about mystical beasts and gods and spheres of divinity or was it natural seeming? Wow, that sounds vaguely familiar.
Point is, it's really neat to see all the original thought or effort being placed in gaming, of all kinds. But it is also a bit overwhelming. From what I can tell the communities are largely welcoming, generous, supportive and that is helpful. However, there is a lot to learn. But, if I had decided to play golf, it too would sometimes verge into the exhaustion that comes with learning something totally new. Muscles are discovered, muscles are flexed, muscles are worn, next time is easier. Gaming in this way is perhaps the first time in my life that I feel like I set out to learn something new...meaning, I have always read, created, learned, written, but it always seemed natural, an extension of just doing and being. Playing rpgs feels unnatural, or disadvantaged, to use the parlance, but it's also fun, exciting, and it pleases me to see previous passions somewhat fused into a new one. Suppose I haven't wandered too far from comfort then, but it's a cool new start.
at July 17, 2020 No comments:

One Page Dungeon - The Veiled Woods

A woods scenario is easy enough to drop into most campaigns, so unlike my previous efforts, this one is more of a conventional approach. I have been intrigued by this idea of local contemporary communities in Europe celebrating seasonal festivals by donning elaborate, fantastical, and often times frightening costumes. I first learned of the story in a National Geographic article called Europe's Wild Men. The basis of The Veiled Woods comes from this. As opposed to open and widely known festival practice, the background in this dungeon is that this rite is emergent, mysterious, and frightens the local authorities. They summon "unsavory" types (adventurers) to come resolve the issue. I've tried again by not drawing out the dungeon, but using descriptions to evoke the setting. I am not sure if this works for these designs, because so much of dungeon design is about the technical measurement, counting resources and movement. It does seem though, that giving players more agency to navigate and make their own decisions while traveling is part the gaming approach, particularly in "osr" games. I think this woods dungeon could be quite deadly with a number of interaction traps and powerful creatures, so even though it is brief, it has potential for being quite challenging. It still needs tested in play, but was fun to design, and some of the items I think are usable.
at July 11, 2020 No comments:

Alan
Recent discoverer of RPGs; after seeing the impressive world outside the popular and conventional Game, became fascinated by the DYI and "indie" attitudes and creativity of so much that is happening - trying to learn more

Places to learn from